Taxes: What people forget about Reagan 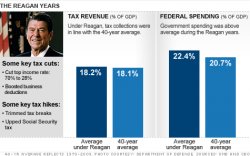 NEW YORK (CNNMoney.com) - Those who oppose higher taxes and are fed up with record levels of U.S. debt may pine for Ronald Reagan, the patron saint of lower taxes and smaller government.

But it's worth considering just what Reagan did - and didn't do - as lawmakers grapple with many of the same issues that their 1980s counterparts faced: a deep recession, high deficits and a rip-roaring political divide over taxes.

Soon after taking office in 1981, Reagan signed into law one of the largest tax cuts in the postwar period.

That legislation - phased in over three years - pushed through a 23% across-the-board cut of individual income tax rates. It also called for tax brackets, the standard deduction and personal exemptions to be adjusted for inflation starting in 1984. That would reduce "bracket creep" since the high inflation of the 1970s and early 1980s meant incomes rose very fast, pushing taxpayers into ever higher brackets even though the real value of their income hadn't changed.

Despite the aggressive tax cutting, Reagan couldn't ignore the budget deficit, which was burgeoning.

After Reagan's first year in office, the annual deficit was 2.6% of gross domestic product. But it hit a high of 6% in 1983, stayed in the 5% range for the next three years, and fell to 3.1% by 1988. (By comparison, this year it's projected to be 9% but is expected to drop considerably thereafter.)

So, despite his public opposition to higher taxes, Reagan ended up signing off on several measures intended to raise more revenue.

"Reagan was certainly a tax cutter legislatively, emotionally and ideologically. But for a variety of political reasons, it was hard for him to ignore the cost of his tax cuts, " said tax historian Joseph Thorndike.

Two bills passed in 1982 and 1984 together "constituted the biggest tax increase ever enacted during peacetime, " Thorndike said.

The bills didn't raise more revenue by hiking individual income tax rates though. Instead they did it largely through making it tougher to evade taxes, and through "base broadening" - that is, reducing various federal tax breaks and closing tax loopholes.

"What people forget about Ronald Reagan was that he very much converted to base broadening as a means of reducing deficits and as a means of tax reform, " said Eugene Steuerle, an Institute Fellow at the Urban Institute who had helped lay the groundwork for tax reform in 1986 and served as a deputy assistant Treasury secretary during Reagan's second term.

David Stockman on Taxes Now and in the Reagan Era

Taxes Higher Under Reagan Or Obama?