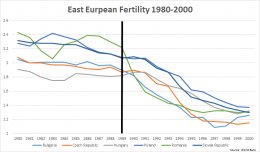 Joseph Nye, the dean of liberal internationalism, has been regularly writing about Russia over the past few months. Given his position and his peerless credentials (Rhodes Scholar, Harvard professor, Assistant Secretary of Defense) his analysis is an extremely handy summary of the way in which the American political elite looks at Putin and the Russian political system more generally.

Well it’s not exactly surprising, but the person who coined the term “soft power” isn’t terribly impressed with old Vladimir., a full decade earlier than in other developed countries.

Though liberalizing reforms could cure Russia’s ailments, such an agenda is unlikely to be embraced in a corruption-plagued country with an emphatically illiberal leadership. Putin, after all, has sought to promote a neo-Slavophile identity defined above all by suspicion of Western cultural and intellectual influence.

Nye’s faith in the ability of liberalizing reform to right all wrongs is quite typical of the American government. If you talk to someone who works at the State Department or USAID there are very few (if any) problems that they think can’t be fixed through the right combination of reforms. Lower taxes here, cut red tape there and everything will pretty quickly work itself out.

For many problems (corruption, economic stagnation, low productivity) liberalizing reform is in fact the right answer. The market is an extraordinarily powerful force and, if people are given the right incentives, it contains an enormous potential for economic and social progress. Liberal economic reforms in China and India have helped more people escape poverty more quickly than any other policies in human history. All else being equal, it seems clear that liberal reform is better than the alternative.

For other problems, though, liberalizing reform doesn’t appear to have very much to contribute. Take the problem that Nye was discussing: demography. Thankfully we don’t need to imagine what would happen to a particular country’s demography when it undertakes radical liberal reform. This is exactly what happened across a wide swath of Eastern and Central Europe in the years after 1989.