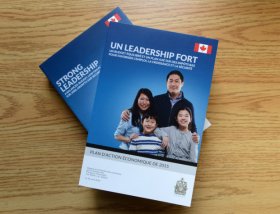 The federal budget is in and the battle is on. It will unfold, within three weeks at the outside, with the unveiling of a major Liberal economic plank many months in the making, intended to trump the income-splitting and moderately enhanced universal child benefit upon which the governing Conservatives have staked their political future.

The fog of secrecy shrouding this plan, meant to answer the central question that has dogged Justin Trudeau since he vaulted to the head of his party two years ago (You say middle-class Canadians are hurting – but what will you do about it?) remains thick. Its unveiling originally had been timed for March, following a February budget. It was delayed when Finance Minister Joe Oliver delayed; Liberal strategists wanted to be certain they had the Conservative plan in hand before finalizing details of their counter-stroke. 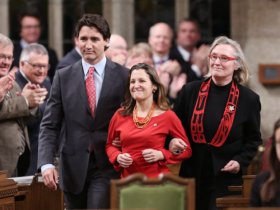 In particular there was concern the Tories might reverse themselves on income-splitting, or dramatically revise the tax break, which the C.D. Howe Institute and others have said benefits only the wealthiest 15 per cent of Canadian families. The Liberal plan is predicated on redeploying the billion a year budgeted for income-splitting. Oliver’s budgeted increase in the allowable annual contribution to a tax free savings account (TFSA), to $10, 000 from the current $5, 500, will also be nixed should the Liberals form a government, Trudeau confirmed Tuesday.

The lion’s share of any savings will presumably be applied toward the Liberal alternative, which we only assume will be called, just to blue-sky it a bit, “The Liberal Plan To Restore Opportunity and Growth for Canada’s Middle Class, ” or some such. The Liberal proposal will be offered, Trudeau also confirmed Tuesday, within the context of a promise to balance the federal budget next year.

@seanmdav What happened with dem support in the south when party platform became more liberal in last 1/4 of 20th century? @WillMcAvoyACN Thu, 25 June 2015 12:21 AM