What is a political liberal? 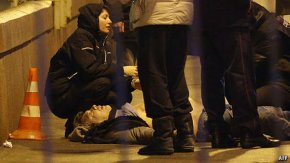 “NEMTSOV is a national traitor! Execute the traitor!” wrote a commenter a few days ago, on an internet petition to strip Boris Nemtsov of his mandate as a deputy of the local council in the provincial town of Yaroslavl. On his Facebook page, Mr Nemtsov quipped right back: “I just don’t understand one thing. Are they collecting signatures to strip me of my mandate, or to execute me?”

The answer came just before midnight on February 27th, when Mr Nemtsov, a charismatic opposition politician who led the reform process while serving in Boris Yeltsin’s government in the 1990s, was assassinated on a bridge just steps away from the Kremlin. Mr Nemtsov was shot with four bullets fired from a passing car. The area is infested with video cameras, police, security services and secret agents charged with protecting Russian president Vladimir Putin.

Given the level of security in the vicinity of the Kremlin, it is hard to imagine why Mr Nemtsov's killers would have picked that spot for the shooting, unless they had reason to believe they would be able to escape. The assassins did not try to cover their traces; they did not shoot the woman who was walking with Mr Nemtsov. It is by far the most significant political assassination in recent Russian history. 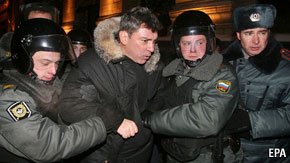 Many have drawn parallels between this crime and the fates of other recent victims, such as Galina Starovoitova, a democratic reformer killed in 1998. Yet the atmosphere in Russia is increasingly reminiscent of darker days from a more distant European past.

It is an atmosphere Mr Nemtsov himself described 10 months ago, when nationalist euphoria was building on the back of the annexation of Crimea and an escalating war in Ukraine. “I can’t remember such a level of general hatred as the one in Moscow today, " Mr Nemtsov wrote on his Facebook page...

Not in 1991, during the August coup, not even in 1993 [during Yeltsin’s stand off with parliament]. Aggression and cruelty are stoked by the television while the key definitions are coming from the slightly possessed Kremlin master. "National traitors", "fifth column", "fascist junta"—all these terms are coming from the same Kremlin office…The Kremlin is cultivating and rewarding the lowest instincts in people, provoking hatred and fighting. People are set off against each other. This hell can not end peacefully.

In the past year, the atmosphere of aggression and intolerance has only become stronger. A week ago, tens of thousands of well-dressed young men and women marched through the centre of Moscow, carrying banners filled with hatred for liberals and vowing not to allow a Russian version of Kiev's Maidan revolution, or any return of the liberalism of the 1990s. Some carried Mr Nemtsov’s photograph, labeled “an organiser of Maidan”.

what is a Republic? this video Briefly explains types of ...

What a Liberal Democrat Utopia looks like
Related Posts