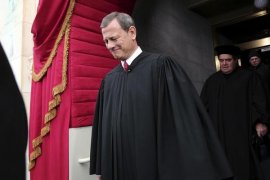 Conservatives were disheartened by the Court’s rulings Thursday in King v. Burwell and Texas Department of Housing and Community Affairs v. The Inclusive Project. They probably will be disheartened if the Court rules that gay marriage is a constitutional right, which seems likely. I suspect I got the authorship of the Arizona redistricting commission case wrong in my Supreme Court Bingo article: the opinion assignments make more sense if Justice Kennedy lost his majority in Din, which would suggest Justice Ginsburg is writing the redistricting commission opinion. That means conservatives may well be disappointed in the outcome of that opinion as well.

Unsurprisingly, conservatives are up in arms about the supposed “selling out” from Chief Justice John Roberts. Their reaction is something along the lines of Obi-Wan’s final words (from Obi-Wan’s point of view) to Anakin Skywalker: “You were the chosen one! It was said that you would destroy the Sith, not join them!”

This all seems to validate a recent New York Times story declaring that the Roberts Court has moved decidedly leftward, and that this term was shaping up to be the most liberal since the 1960s. But both this methodology and the conservative reaction suffer from the same problem: The inability to deal with shifting ideologies over long time periods.

Simply put, a Court where Justice William Brennan was the “swing vote” – which describes the Warren Court after Thurgood Marshall had replaced Justice Tom Clark in 1968 – isn’t really comparable to a Court where Justice Kennedy is the swing vote (for more on the methodological limitations of ideological measurements, see ). The issue matrixes have simply changed too much to meaningfully compare them. Or, to put it differently, if judicial liberalism is on the rise, it ain’t what it used to be.

The Video: A perspective from a liberal veteran

What is the Program of Liberal Studies? A Student Perspective

@tanehisicoates The flag is a big deal; but the race/class argument is accurate from a Marxist, not liberal perspective. Thu, 25 June 2015 03:11 AM