Political ideology is not a map, grid, graph or chart 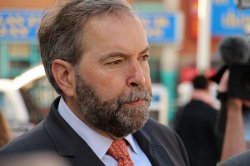 We see them in every election campaign: lines, grids and maps of all kinds. We fill out a form with a few or a lot of questions and find ourselves represented as a dot, usually on a grid opposing social (up or down) and economic (left or right) liberalism or conservatism. We shrug our shoulders at the result, maybe share it on Facebook, and then forget about it. But this idea that we can plot every political ideology and set of beliefs on a simple grid has become such an ordinary way of talking about politics that we take it for granted, even as it's dangerously misleading. When we think of political concepts and policies this way, we all lose. Here's how.

Moving to the 'centre' to appeal to 'right' voters

I have been a proud member of the NDP for years, having come from a family that has long supported that party and its ideals. My mother volunteered with Henry Morgentaler's first clinic in Newfoundland, long before the governing parties of Canada supported a woman's right to choose. My grandparents' generation included one of Labrador's first union organizers. Progressive politics runs in my family.

So I found myself dismayed to see Tom Mulcair purposely frame his new direction for the NDP as tacking to the centre, especially since he has compared his policy strategy to that of Tony Blair's leadership of New Labour in the 1990s. First, after the disaster of Iraq, any progressive political leader would have to be a fool to say in public that he is anything like Blair. Given what I've said about my familial bonafides on the progressive left, you might suspect that you already know all of what I'm about to say: that the NDP must restore its place on the traditional left and give up this tack to the centre, which would abandon fighting neoliberal abuses of working people.

Traditional NDP policies such as strong unions, fair wages and a broadly socialist political order do not constitute the 'left' in any simple sense. All the policies, positions and concepts that exist on the left, the right and the centre do not make good bedfellows, and often completely contradict each other.

Ideological Shifts in UK Political Parties from 2010 to 2015