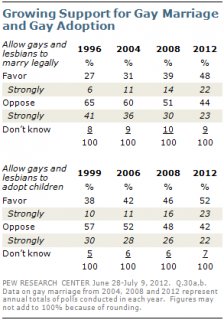 The issue of gay marriage remains a polarizing one across the political spectrum. Among conservative Republicans, an overwhelming majority (78%) opposes gay marriage. By contrast, a wide majority of liberal Democrats (83%) favor allowing gays and lesbians to marry legally. Views of independents, and moderates in both parties, are more mixed.

Six-in-ten college graduates support allowing gays to marry (60%), compared with 51% of those with some college experience and 38% of those with no more than a high school education. (For long-term trends on views of gay marriage, based on yearly totals, see “Changing Attitudes on Gay Marriage”.)

Just 22% of white evangelical Protestants favor gay marriage while 73% oppose it. By comparison, there is more support (50%) than opposition (40%) among white mainline Protestants. Nearly six-in-ten white non-Hispanic Catholics (59%) favor allowing gays and lesbians to marry, as do 57% of Hispanic Catholics.

About four-in-ten black Protestants (38%) favor allowing gays and lesbians to marry legally, while more than half (54%) are opposed.

People who have no religious affiliation favor gay marriage by 72% to 20%. Among atheists and agnostics, an overwhelming majority (88%) supports gay marriage; just 6% are opposed. Among those who describe their religion as nothing in particular, 65% support gay marriage and 26% are opposed. 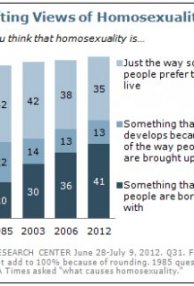 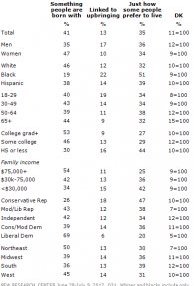 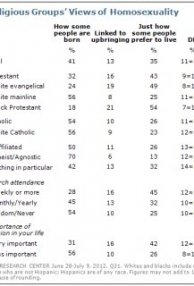 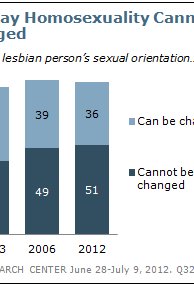 My Views On Gay Marriage In Maryland

my views on gay marriage.