Canada’s Left-most Party, the NDP, Moves Ahead of the Neo-liberal Liberal Party 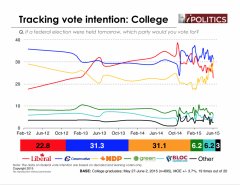 This is entirely the result of the decisions made by Liberal Party leader, Justin Trudeau, and by NDP leader, Thomas Mulcair. After Parliament was attacked by a mentally ill man, the Canadian Prime Minister, Harper, decided to push through a surveillance and police state bill, Bill-C51. This bill voided about half the Canadian Charter of Rights and Freedom.

Immediately after the attack, support for the bill was in heavy majority territory. So Justin Trudeau, the Liberal leader, decided to support it. Mulcair decided not to support it.

But Canadians turned out to be more sensible and principled than Trudeau thought (indeed, I was surprised, though I would have done as Mulcair did as a matter of principle); as time went by and the details of the bill came out, they turned against it.

Or, as I sarcastically noted some time ago, “I’d like to thank Justin Trudeau for single-handedly reviving the NDP’s election chances.”

Justin Trudeau is, for those who don’t know, the son of the great Pierre Trudeau, who ran the country through much of the 70s and 80s, and who is beloved by many on the left (and truly hated by many on the right, and in the West). Justin is also quite pretty, and has beautiful abs, which he showed off in a boxing match he won.

Meanwhile Mulcair kept just doing most of the right things. And one day Justin, who was always quite clearly a neo-liberal with few actual left-wing beliefs, made an error of judgment and character which left-wing swing voters weren’t willing to overlook.

Jorge And Alberto vs The Neoliberal Demons (2014) Trailer