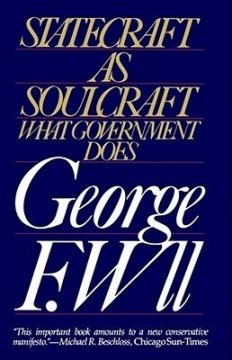 Suffused with the thoughts of Burke and Tocqueville, George Will’s slim book is an exhortation demanding political views imaginative and humane. Hobbes and Locke, self-interest and individualism are abhorred by Will; he advocates “conservatism with a kindly face.”

“Liberal democratic societies are ill founded, ” Will tells us. The assumptions of the Founding Fathers—or some of those assumptions—will not suffice for our age. By nature, the state is a moral agency; but the doctrine of self-interest, extended from economics to politics, enfeebles us as a people. What we require in our present confused hour is Aristotle’s society of diffused friendship, moved by the moral imagination.

Government, necessary to human existence, should be regarded as a protector, not as an adversary. (Here, Will might have done well to distinguish more clearly between the state, which is permanent, and governments, which are temporary. In Burke’s definition, the state is ordained by divine intent, but governments are creations of human wisdom to supply human wants.) He soundly drubs anarchistic libertarians and all those who fancy that the art of politics is a mere exercise in economics. He is no less wrathful with latter-day liberals:

The fundamental goal of modern liberalism has been equality, and it has given us government that believes in the moral equality of appetites. The result is a government that is big but not strong; fat but flabby; capable of giving but not leading. It is invertebrate government, a servile state that is part cause and part consequence of the degradation of the democratic dogma.

Government’s concern for virtue has been contracting while government’s material activity has been expanding. Will would have us develop a “conservative doctrine of the welfare state”—which state would work for the moral improvement of its citizens, as well as for their creature comforts. The economic policies of any government, including the present administration in the United States, necessarily produces social alterations: Will aspires to a government that will work deliberately, through macroeconomics, to increase the common good in ways that are not merely economic.

It would be helpful if Will had given us a new term to describe the beneficent polity he has in mind. In America, “welfare state” implies a bureaucracy feeding a proletariat; in Britain, it means the postwar creation of Lord Beveridge with its present economic and social distresses. Might “the humane state, ” with Wilhelm Roepke’s “humane economy, ” be a useful label?

In its emphasis upon a moral order, is akin to T. S. Eliot’s , and in its high disdain for the practical political objectives and the practical politicians of the 20th century, too. Yet, Will mentions Christian doctrine only incidentally. In Christian teaching, it is the church, not the state, which works upon consciences.

7 People to Get Your Political Views From