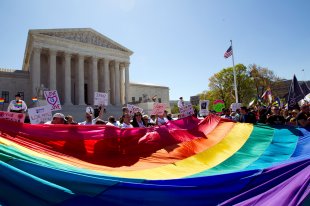 Jose Luis Magana—AP Demonstrators stand in front of a rainbow flag of the Supreme Court in Washington on April 28, 2015.

Supreme Court justices met Tuesday for the second time in two years to debate the constitutionality of same-sex marriage bans. The case could lead to a decision that would outlaw the bans across the country this June

Should the Supreme Court take into account the opinions of the rest of the world when reading the Constitution? In the past, some conservative justices have argued it should not, but they seemed to take the opposite tack Tuesday when debating gay marriage.

“Do you know of any society, prior to the Netherlands in 2001, that permitted same-sex marriage?” Justice Antonin Scalia asked an attorney representing gay couples who wanted their marriages to be recognized. “You’re asking us to decide (whether to approve same-sex marriage) for this society when no other society until 2001 ever had it.”

Jumping off that question, Justice Samuel Alito noted that even though there have been cultures that “did not frown on homosexuality” — such as ancient Greece — they did not recognize same-sex marriage either.

And Chief Justice John Roberts talked about how limiting marriage to a man and a woman was “a universal aspect of marriage around the world.”

The implication was clear: Other countries haven’t recognized same-sex marriage, therefore the United States doesn’t need to either.

In the past, Scalia in particular has taken a dim view of that same logic when applied to other topics. In 2005, Justice Anthony Kennedy cited international law in a majority opinion which held that imposing the death penalty on Americans under the age of 18 was a violation of the Eighth Amendment’s ban on “cruel and unusual punishment.”

“The overwhelming weight of international opinion against the juvenile death penalty is not controlling here, but provides respected and significant confirmation for the Court’s determination that the penalty is disproportionate punishment for offenders under 18, ” he wrote in a footnote to .

That inspired a sharp rebuke in a dissenting opinion from Scalia, who argued that the court should not “take guidance from the views of foreign courts and legislatures.”

“I do not believe that the meaning of our Eighth Amendment … should be determined by the subjective views of five Members of this Court and like-minded foreigners, ” he wrote.

In politics, this kind of reversal is typically greeted with condemnation, catcalls of “flip flopping” and hypocrisy. But Eugene Volokh, a constitutional law professor at UCLA, said that it wouldn’t be fair to level the same accusations against the justices.

Oral arguments like Tuesday’s hearing are more freewheeling, he said. The justices aren’t necessarily laying out eternal principles as they are trying on different arguments for size, seeing what kind of reaction they got. Sometimes, like guests at a long-running dinner party, they’re just trying to needle each other or make something akin to an inside joke with each other.

Volokh noted that Kennedy, who is expected to be the swing vote in favor of gay marriage in this case, had cited a decision in the European Court of Human Rights and a committee report to the British Parliament in a 2003 decision overturning sodomy laws, a key precedent in this case.

Conservatives Are Still Blocking Gay Marriage In The South ...

RT @FilmLadd: Get government out of marriage licensing business. The End. MT @dcexaminer Social conservatives don't know what to do next on… Sun, 28 June 2015 05:20 PM