Social Liberalism in the U.S 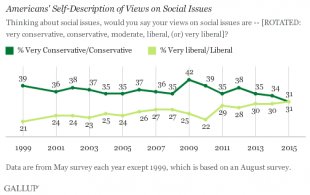 Social Liberalism on the Rise

Since the late 1990s Gallup has tracked the share of Americans who say their views on social issues are “liberal” or “very liberal.” In 1999 Americans were nearly twice as likely to say they were socially conservative as socially liberal (39 to 21 percent). However, throughout the 2000s the share of Americans who viewed themselves as liberal on social issues has steadily increased. In Gallup’s latest poll, Americans are equally likely to say they are socially liberal as socially conservative (31 percent each). 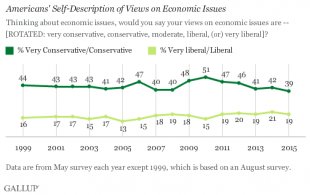 Since 1999, there has been no significant change in the share of Americans who view themselves as “liberal” on economic issues—16 percent in 1999 and 19 percent in 2015. There has been a slight decline in the share who view themselves as economically conservative from 44 percent in 1999 to 39 percent in 2015. However, there was a marked increase in self-identified fiscal conservatives between 2009 and 2012, when more than half identified as such. However, this share has since declined to 39 percent. There appears to be a reversion to the mean in American fiscal attitudes.

Leftist attacks on @nikkihaley, @BobbyJindal, @DineshDSouza prove Conservatism = be all you can be Liberalism = be what we tell you you are Thu, 25 June 2015 03:10 PM