The 11 principles of a Reagan conservative 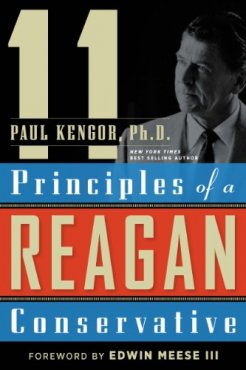 “For the conservative, freedom requires faith; it should never be decoupled from faith. Freedom not rooted in faith can lead to moral anarchy, which in turn, creates social and cultural chaos. Freedom without faith is the Las Vegas strip, not the City of God. Freedom without faith begets license and invites vice rather than virtue. Faith infuses the soul with a sanctifying grace that allows humans in a free society to love and serve their neighbors, to think about more than themselves. We aspire to our better angels when our faith nurtures and elevates our free will.

Freedom not rooted in faith can lead to moral anarchy, which…creates social and cultural chaos.

…[During a speech at Georgetown in 1988]: “He asked his audience to pray that America be guided by learning, faith and freedom. He quoted Alexis de Tocqueville…”Tocqueville said in 1835, and it’s as true today as it was then: ‘Despotism may govern without faith, but liberty cannot. Religion is more needed in democratic societies than any other. ‘” With a nod to his academic audience, Reagan warned “Learning is a good thing, but unless it’s tempered by faith and a love of freedom, it can be very dangerous indeed. The names of many intellectuals are recorded on the rolls of infamy, from Robespierre to Lenin to Ho Chi Minh to Pol Pot.”

Why Is Ronald Reagan Conservative Hero & Frame of Reference?

The 11 principles of a Reagan conservative
Related Posts

.@BillKristol @Normsmusic Reagan was our first polygamist president. Or are you saying only conservatives get to redefine marriage? Sat, 27 June 2015 12:23 AM