America the Beautiful, by Ben Carson 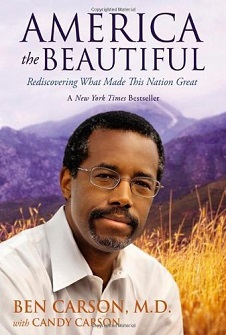 This book isn't Ben Carson's first book, but it's his first purely political book. His previous books addressed his life story and his medical practice (as a leading pediatric neurosurgeon); this book outlines his political stances. Overall, it feels like it's written by a political novice - which of course Ben Carson is, never having run for office despite his current status as Tea Party darling for the presidential nomination in 2016.

Political books by political novices do have their charms - they do not contain the hedged "nuanced" stances made by dissembling politicians. Carson sounds genuine here, telling his compelling life story (raised in poverty but with a high regard for education). Unlike the previous tellings of his life story, this one addresses his politics: how he came to be a conservative despite being constantly surrounded by Democrats in the African American community and liberal colleges.

Every chapter has Carson exploring historical perspectives - from ancient Israel (p. 29 on hierarchical leadership) to ancient Rome (p. 131 on military over-stretch) - it often reads like a "study guide" to introduce historical context to a new politician. I'm not criticizing that - I do the same thing as a means to learn a new topic - and Carson's choices of historical examples illustrates what he considers important. What he considers important usually reflects on Constitutional originalism, citing the Founding Fathers frequently, or on faith in American government and past leaders (for example pp. 49-50, where he explores the non-atheism of both Thomas Jefferson and Benjamin Franklin). If you like historical perspective, this book has plenty - but it often feels like a stretch to apply ancient lessons to modern politics.

Carson also repeats himself repeatedly - using the same phrases in different chapters to illustrate the same points in different contexts. That criticism usually means the chapters were written as stand-alone pieces - but that does not seem to be the case here - this book was written as a complete book. We had the same criticism of Obama's book "The Audacity of Hope", and we come to the same conclusion: Carson expects his readers to read only one chapter and then move on, so he'd better make each chapter self-contained and include all of his catchphrases. When reading the book cover-to-cover, that stand-alone-chapter writing method becomes annoying for the reader. For example:

AMERICA THE BEAUTIFUL by Ray Charles

The Book Club: America the Beautiful by Ben Carson

Dr. Ben Carson Author of "America the Beautiful" - The ...