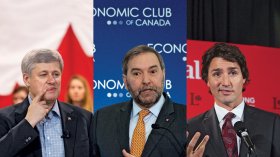 By proposing a middle-class tax cut and a new child benefit, Liberal Leader Justin Trudeau today filled in some of the major gaps in what we knew about how this fall’s federal election will be fought, when it comes to economic policy.

Don’t miss Kevin Milligan’s clear analysis of today’s Liberal policy proposals. (The University of British Columbia economist and Maclean’s blogger is on Trudeau’s economic advisory council, so he had a jump on the story, much to the benefit of any reader seriously curious about this policy.)

His second proposal, something called the Canada Child Benefit, is more complicated. The CCB would roll together some $18 billion a year of existing federal child benefits and add another $4 billion. The upshot varies for different sorts of families. But, for instance, Liberals say a typical two-parent family with two kids would get $490 a month, tax-free, under their plan, compared to $275 a month, after taxes, under the Conservatives.

At the same time, Trudeau would eliminate Prime Minister Stephen Harper’s signature $2-billion “Family Tax Cut” income-splitting measure, which allows couples with kids to save on their taxes by transferring income from the higher-earning to the lower-earning spouse. (That leaves the Liberals with $2 billion of their $4 billion in added CCB benefits to find someplace else.)