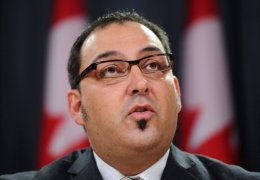 TORONTO — Ontario’s provincial police have gone to court to seek recordings in an investigation into allegations the province’s Liberals broke the law during the selection of a candidate for the Sudbury byelection.

Premier Kathleen Wynne asked Andrew Olivier, the Liberals’ candidate in Sudbury in last June’s general election, not to seek the nomination for Thursday’s byelection because she had another candidate she wanted to appoint.

Olivier has alleged that the Liberals offered him a job or appointment in exchange for his stepping aside for Glenn Thibeault, who left his job as an NDP MP to run for the provincial Liberals.

Olivier, who is quadriplegic and records conversations in lieu of taking notes, posted audio to YouTube of his talks with two Liberals, including Ontario Liberal campaign director Pat Sorbara.

The Progressive Conservatives asked the OPP to investigate, believing the Liberals’ alleged actions could contravene sections of the Criminal Code that relate to offering government advantages and securing appointments.

After interviewing Olivier the police found no evidence to conclude a criminal offence had been committed. But after Olivier posted the audio online, the Tories asked the OPP to take another look.

“Mr. Olivier had the opportunity to voluntarily offer the recordings he had made at the time to the OPP, but he chose not to do so, then he released recordings with two individuals via social media after that, ” said OPP Det.-Supt. Dave Truax.

“Subsequent to that we’ve reviewed the matter further and since that time have obtained a production order.”

Elections Ontario is also investigating and has interviewed both Wynne and Sorbara, after the New Democrats suggested the Liberals’ alleged conduct violates the Election Act, which makes it an offence to promise a job or appointment to induce a person to withdraw their candidacy.

“The fact that Premier Kathleen Wynne and the Ontario Liberal Party are under investigation by Elections Ontario and the OPP anti-rackets squad for attempted bribery speaks volumes about their arrogance, entitlement and cynical politicking, ” NDP MPP Gilles Bisson said in a statement.

The Liberals say Olivier’s recordings vindicate them, as they were discussing ways Olivier could remain involved in the party or with accessibility work, but only after he was already told he wouldn’t be the candidate.

“We should have the broader discussion about what is it that you’d be most interested in doing, then decide what shape that could take that would fulfil that, is what I’m getting at, whether it’s a full-time or part-time job at a (constituency) office, whether it is appointments to boards or commissions, whether it is also going on the (party executive), ” Sorbara said in the conversation.

Justin in action at the Liberal Party of Canada Leadership ...
Related Posts